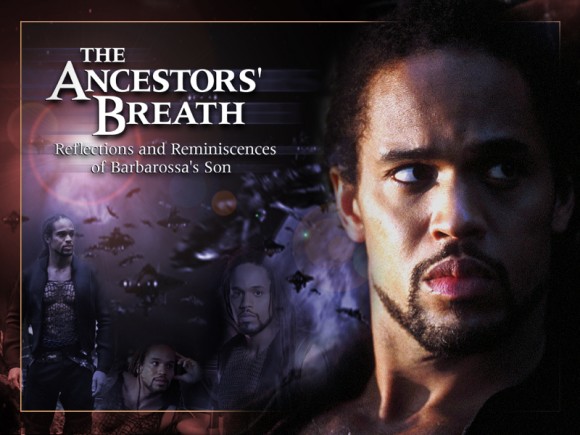 “You are the center of the wheel”, my father would speak into my ear as he rocked me to sleep in his arms on the nights that from among his wives my mother called him to come to her.  “All things revolve about you.  You are the only god; your strength the greatest strength; your arm the fellest arm.”  These words he whispered even as his massive biceps pressed me about the ribs restraining my breath, and my head rested no differently than some fragile paper thing, unarguably crushable in the gulf of his huge hand.  “No value is greater than yours; no glory greater save that which will spring from you.”  I was nearly eleven with the physical stature of any average sixteen-year-old human boy when the blitzkrieg of the Drago-Kazov betrayal brought an abrupt end to this practice and changed the nature of all that I knew and would know.  Were it not for his death at their hands, I have no doubt that Barbarossa would have continue to enact the ritual, despite my daily increasing size and weight, for yet some time to come. END_OF_DOCUMENT_TOKEN_TO_BE_REPLACED

My father was quite fond of reading and quoting a Nietzschean  supremacist poet who called himself King Darius, or “The King”.  He wrote, “Glorious son, go up from the nightside and look down on us. / Where the lights shine brightest, there! There are we. / Where darkness alone resides, yet there are peoples whose one resource is wishing. / Go up because you can. / It will remind you of who you are. / And of who you shall not ever be again.”   King Darius’ writings reflected upon Nietzschean world scenarios that existed ten to twelve generations prior to his words ever reaching my father’s eyes.  Subjugation of inferiors, or “primitives” as is perhaps the more accurate term, was commonplace, and necessary to ensure economic development.  His works enjoyed a resurgence of popularity during my childhood among Nietzschean slavers and those who refused to either denounce or condone their practices.  My father was one of the latter. END_OF_DOCUMENT_TOKEN_TO_BE_REPLACED

“Making love”… While no Nietzschean ever tends to use that Human euphemism, my grandfather, Temujin II, would say that no man is to be trusted who doesn’t subsist on a steady diet of sex and violence as well.  Of course, from a Nietzschean perspective, no man is to be trusted regardless, but why waste a perfectly valid turn of phrase for the sake of a technicality?  My grandfather, whom I admired, was a bit of a Dragonian lunatic, if I may use it as a term of endearment; a less extreme incarnation of his old namesake, Temujin I.  Which is to say that a greater than average portion of his adult life was spent fighting and procreating; for Nietzscheans, the most inevitable if not the most pragmatic of life’s endeavors.  And so, to him, to most of us, it has never made sense to create language around them meant, it seems, only to somehow civilize their primal nature.  The Human will ceaselessly put forth the proposition that sex and violence are not inextricably linked, and, in fact, they may not be for him because he kills and copulates for many various and sundry odd reasons that the Nietzschean, generally speaking, does not.  END_OF_DOCUMENT_TOKEN_TO_BE_REPLACED


For Moments at Seventeen

(Because the Commonwealth is human-centric, and everything is measured in Earth years.  Silly, yes?)

If now is a time that is forever “after this last” and “before that next thing,” then the now, or series of nows, that comprised the six months after I had, by what means I don’t really know, delivered myself from indenture to a ring of flash and weapons traders, and before anyone had ever offered me a fee to take a life, were peaceful.  The verbal contract with the traders, a colorful but pernicious cast of characters who called themselves The Consortium, dictated that I remain in their employ for another full year.  If I had not been bored, restless, at odds with their methods, undercompensated, and underappreciated …well…I am still.  Suffice it, however, to say that if I had not been seventeen, which is to say had I been the mature and prophetic sage that I am today, I probably would have stayed.  A funny thing, the propriety of thieves who will cite you your obligation to the letter of your contract with the gravest decorum while robbing everyone blind and fatting themselves on the fruits of your labor.  Funny too are a young man’s impulses.  Perhaps afraid that, once finding me gone, they would be even angrier with me to realize as well that I had run with some sizable portion of their contraband and thus be compelled to a more fervent pursuit, I instead took flight with nothing.  I was to learn that, despite having left them with all that was “theirs” except for my humble self, my having broken my scoundrel’s oath and bolted at all gave them umbrage enough to pursue me to exhaustion, on sheer principle I suppose.  It was a decision on my part that I can’t even label as juvenile, for it was one that no other Nietzschean male over the age of nine, to my knowledge, would ever have made. END_OF_DOCUMENT_TOKEN_TO_BE_REPLACED

I can wander the decks of the Andromeda Ascendant for days without end and never travel the same stretch of corridor twice.  In her depths, further than any short sojourn from command, are endless dark and dormant chambers where no one has stood for over three hundred years.  Onboard this ship, as I imagine it goes in the military, a man’s quarters are anything but inviolate.  Anyone can find me in mine, and all too often do.  Privacy is provided only by journeying too deep into Andromeda’s guts for anyone to care to come and retrieve me if I fail to answer the com.  Of course, there really is no hiding from the ship herself.  And she tends to concern herself a bit beyond reason with the Nietzschean’s whereabouts, I think.  But then, I imagine I would keep an eye on me if I were she.  I am a wanderer by nature it seems.  And to explore these empty decks long enough would probably offer up an intimate knowledge of things best left unbeknownst to one of questionable intent. END_OF_DOCUMENT_TOKEN_TO_BE_REPLACED

The physicist, Albert Einstein uncountable eons ago said this:  “A human being is part of the whole called by us ‘the universe,’ a part limited in time and space.  He experiences himself, his thoughts and feelings, as something separate from the rest – a kind of optical delusion of consciousness.  This delusion is a kind of prison for us, restricting us to our personal desires and affection for a few persons nearest to us.  Our task must be to free ourselves from this prison by widening the circle of understanding and compassion to embrace all living creatures and the whole of nature in its beauty.”

Merely by virtue of having, through no force of mine own will, been born in the age that I was, I could quite readily teach that brilliant old sage many a thing that would stand his primitive quantum theory on its ear and fry the synapses in his pre-historic brain.  But yet I could not improve upon this one simple set of thoughts. END_OF_DOCUMENT_TOKEN_TO_BE_REPLACED


Things My Father Said To Me

Think and all the ancestors think with you.  Fight and you fight alone.

None do more ill than those perpetually endeavoring to do “good”.

No dead thing has a value.  Think before killing, then kill without further thought.  Indecision is deadly.  Guilt and remorse are as valueless as dead things.

Honor Drago in all that you do and let be.  Exaltation is for humans and idiots.

You are the center of the wheel.  All things revolve about you.  You are the only god; your strength the greatest strength; your arm the fellest arm.

You are forever on your own.

Keep company with women as much as possible.  All that you are and ever will be begins and ends there.

Vengefulness will waste your life for you.  The greatest harm you can do to your enemies is to make too many babies for them to ever vanquish.

Nietzscheans!  What a grand, glorious, and unmanageable mess of a people we are!!


Things My Mother Said To Me

If you cannot always say precisely what you mean, it will forever seem to others as though you do not ever mean what you say.

Listen to those who say very little very carefully.

Watching and listening will get you far more than speaking.  This is simply because most others are busy doing just the opposite.

Trust me and eat.