I can wander the decks of the Andromeda Ascendant for days without end and never travel the same stretch of corridor twice.  In her depths, further than any short sojourn from command, are endless dark and dormant chambers where no one has stood for over three hundred years.  Onboard this ship, as I imagine it goes in the military, a man’s quarters are anything but inviolate.  Anyone can find me in mine, and all too often do.  Privacy is provided only by journeying too deep into Andromeda’s guts for anyone to care to come and retrieve me if I fail to answer the com.  Of course, there really is no hiding from the ship herself.  And she tends to concern herself a bit beyond reason with the Nietzschean’s whereabouts, I think.  But then, I imagine I would keep an eye on me if I were she.  I am a wanderer by nature it seems.  And to explore these empty decks long enough would probably offer up an intimate knowledge of things best left unbeknownst to one of questionable intent.

“Questionable intent” – every Nietzschean’s middle name.  It can be worn with no less pride than one’s lineage, or denied and lived down like a shameful deed for the entirety of one’s miserable life.  I choose the former myself.  The old Commonwealth, it seems to me, was teeming with the other variety of  Nietzschean who bought into the convenient old Commonwealth dogma of negativity concerning something so inherent in our state of being; bought into the idea that only “bad” Nietzscheans can’t be read like any child’s open book.  The irony here was that, in the critical hour, the High Guard awoke to find that even the majority of assimilationist Nietzscheans had been unsuccessful in vanquishing the less “trustworthy” aspects of their nature, and untameable self-interest, for a while at least, ruled the day. 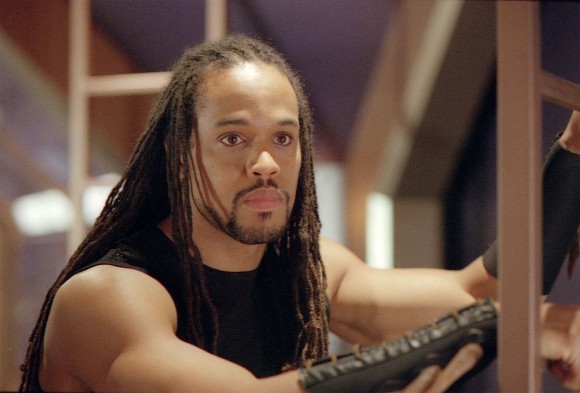 But this I’ve already discussed.  Starry-eyed idealist idiots drafted the Treaty of Antares.  It could have generated no other result but rebellion and war.  The new Commonwealth, if there is ever to be one, in order to avoid another wholesale insurrection, must not try to assimilate its Nietzschean contingent.  While we are Homo sapiens’ closest relative, we will never be one and the same.  In praise of my good captain’s clarity of sight I must say here that, to this point, he seems to have understood and embraced the idea that the only way to co-exist with a Nietzschean is to never forget that you are attempting to co-exist with a Nietzschean.  While our respective arrogances wrangle on, yet we have begun to adopt aspects of each other’s process of thought.  It seems to me it is the beginning of the only way.  But what a huge digression this has been!  Often the paths of consciousness are as meandering as the maze of Andromeda’s lower decks.

The sanctum I have found to sit and scribble another page in this inelegant tome appears to be a vestigial medical bay.  An infirmary perhaps.  Beds line the walls and dormant machinery sits silently waiting for an entire crew’s ills to oversee.  Quite safe I think it is to assume they won’t be back.  Instead, Tyr the Kodiak will keep an hour’s company with the anticipatory stillness.  I shall recline me here and write in the dim light of Andromeda’s quiescent depths, about nothing – everything.  There seems for me to be some salvation in scrawling miscellaneous unsolicited opinions for I know not who to see.  Perhaps, in my solitude; in my only-ness, I dream troubled, waking dreams of fading away and am fearful.  Perhaps clumsy chronicles like these are the surrogate of the childless Nietzschean; a mostly imaginary structure to which to announce his having been.  My father would giggle sadly at what smells distinctly of self-pity.  My mother, would contemplate me with eyes so piercing, intense and expectant that I would quickly look away.  I still look away.